PEYTON, Colo. (Nov. 7, 2013) — “I felt like I was going after someone who needed to be stopped, pulled over, you never know,” said seventh grader Maddelyn Sackuvich, exiting a flashing police vehicle Nov. 6 at Falcon Middle School in Peyton.

Sackuvich, 12, was part of a group of sixth and seventh graders taking turns in a parked patrol car. The approaching line of students trembled each time someone wailed its siren. Wesley Woodworth of the Colorado Springs Police Department said, “This is my office.”

The Caruth Institute for Engineering Education at Southern Methodist University in Dallas develops the curriculum to meet academic standards, according to Lindsey Groark, STEM program director. The institute partners with the Military Child Education Coalition for the CSI camps, which receive funding from the Office of Naval Research in Arlington, Va.

Groark, one of four institute representatives coordinating the curriculum at Falcon Middle School, said nearly two years have passed since their pilot camp. Student and teacher feedback continues to improve the framework for inquiry and project-based education.

“It’s really different everywhere we go,” she said. “With every survey’s feedback, we update the curriculum to make it easier to incorporate in the classroom and make it fun. … It’s about them having fun all day, without knowing they’re learning science.”

“It’s been one of our best camps because everyone has been really excited about it, really engaged,” said Groark, adding that principal Brian Smith remained highly involved. “Mr. Smith has been awesome. … He used to be a science teacher, so he gets it.”

At Falcon Middle School, the camp challenged students to catch a “kidnapper.” Following an opening presentation about crime scene processing by local law enforcement, and then the patrol car explorations, science teacher Fawn Copeland’s group got to work.

As Copeland explained how to examine fingerprints pulled from the “crime scene,” her students identified a loop feature in the perpetrator‘s ridge pattern.

“What type of marker or pen was used at the crime scene?” said Copeland, holding test tubes for an ink experiment using paper chromatography. “You can’t just guess, right? You actually have to have evidence to convict someone.”

The students narrowed their 12 suspects down to three by lunch. After eating, they went outside to learn about military working dogs with three soldiers from the 69th Military Police Detachment at nearby Fort Carson. Meanwhile, a second “crime” occurred.

When Copeland’s students returned to their classroom, they compared police photographs, marking places to dust for fingerprints in the altered crime scene. They later found a match. 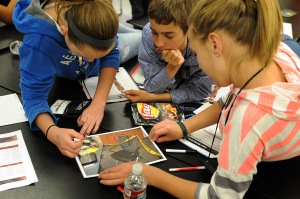 “Good news, we now have a sketch of our suspect,” said Copeland. “The reason we use facial recognition is because we all have different faces. … But we cannot use eyebrows, hair, glasses or clothing because those can change, right?”

The students found bone structure ratios by taking nose and mouth measurements. As they compared their results with the perpetrator sketch, Copeland asked for speculation.

“I think it’s Sameen,” said a student, referring to the lineup photos. “She looks like she’s frowning and angry.”

After the facial recognition results were complete, everyone called for Amanda’s arrest.

“It’s not easy unless you have the information and evidence to prove it,” said Sackuvich, suggesting the first fingerprint was hard to examine, but the second was clear. “I thought it was an arch at first, but then I saw why it’s a loop.”

“We solved a crime,” she said. No stranger to television crime dramas, the hands-on activities helped spark her interest in new career possibilities.

“We’re always changing our minds at our age. … One day I wanted to be a cowgirl, the next a veterinarian—one day I might turn into a detective.”