Every day, we create 2.5 quintillion bytes of data. Ninety percent of the world’s data was created within the last couple of years (2013). In the year 2000, we stored roughly 800,000 petabytes, or 0.8 zettabytes (Zikopoulos, Eaton, Deroos, Deutsch, & Lapis, 2011, p. 5). Researchers expect our storage to reach 35 zettabytes by 2020. Simple morning routines are filling storage devices in tons of ways. Data is created when you turn off your smartphone’s alarm, enter an expressway toll road, buy a cup of coffee and access a secure building. Much of the produced information is rarely analyzed, if at all.

Social media is a catalyst for our explosion of information. Our 21st century information highways are paving the way to massive collaborative activities. Every day, more than 500 terabytes of data is sent to Facebook, as scans and queries organize text, photos and videos (Facebook, 2012). Twitter’s microblogging platform receives 12 terabytes daily (Naone, 2010). Ahead of the Republican and Democratic National Conventions in 2012, Cisco expected a record 1 terabyte of data would be sent from each event (Christie, 2012).

What about more activities that network human brain processing power?

What about more activities that network human brain processing power? That kind of pooled brainpower would humiliate any distributed computing service in creative thinking. The scientific community suggests one human brain is capable of 10 times the processing power of the SETI@home network (Greenemeier, 2009). Simulating a single neuron requires the full power of a laptop computer today (The Human Brain Project, 2013). The brain has billions of neurons, so simulating them simultaneously is an enormous challenge. Brain processing power is being pooled together using participatory media, like Facebook, Twitter, Pinterest. But people are mostly talking to the world, not with. Ideas are habitually sustained, hardly explored. People gather around a cause but collaborative solutions rarely unfold.

The decentralization of information is arguably the most significant development in human communications in centuries, since the printing press. We’ve never been more connected. Half of the U.S. adults and three-quarters of the teenagers use social media (Hampton, Goulet, Marlow, & Rainie, 2012). While it’s improving communications, our commitment to the collaborative emergence of innovative ideas to solve problems isn’t well supported.

When an idea enters social media, it travels one of four ways. People might ignore it, causing nothing to happen. They could click “like” or “favorite,” thereby branding themselves with an idea. Some will share or otherwise republish it, sustaining a thought. They could comment, typically resulting in convergent thoughts and combative listening. Divergent problem-solving dialogue requires safe environments, where people aren’t defined by, or protective of, their views. They value the combining of ideas. They appreciate what might emerge.

Under its existing framework, social media is playing a significant role in rising polarized views. Ahead of the presidential elections in November 2012, voter’s values and basic beliefs were more polarized along partisan lines than at any point in the past 25 years (Pew Research Center, 2012). The average partisan gap had nearly doubled. People are having a hard time tolerating opposing opinions – they’re branding their identities and sustaining the thoughts of other. They’re debating in vertical and shallow threads of archived post-and-forget responses, rather than committing to original and mutual understandings.

It’s time to light up our problem-solving potential. We must inspire more divergent, rational conversations. While social media succeeds in making connections, it’s failing in fueling creative thinking. We need a system that keeps the familiar strange, under a flow of fresh interpretations and innovative ideas. Together, participants in this system will pass through the four stages of creative problem solving: preparation, incubation, illumination and verification (Davis, 2004, pp. 121-122).

Imagine 1 million minds focused on solving one problem. Even the most complex computer algorithms cannot match the human brain’s efficiency. Computers cannot mirror the ways we learn from experience, observation and experimentation, or adapt and reason within changing situations. We must harvest ideas into a collaborative system, guide people through creative problem-solving processes. Help them define problems, neither too narrow nor too broad, and then shove them into a vibrant brainstorming cycle that urges everyone to combine, adapt, magnify, put to other uses, eliminate and rearrange.

When an idea enters collaborative media, it goes one of three ways. First, as always, participants may choose to ignore it. Otherwise, through reflective inquiry, they may define it as a social issue, affecting numerous people, or confirm it as a personal issue. After identifying a problem as a social issue, it’s evaluated as either social fiction or solution. The resources available determine that decision. If they’re inaccessible, the fictional process explores how the idea might be fixed when the resources exist. If it’s a personal issue, the process focuses on helping the person discover underlying issues. 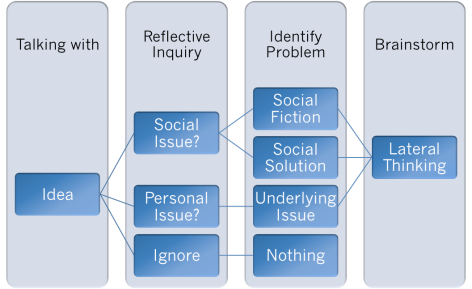 Next, the brainstorming cycle begins, exhausting a lateral thinking process. While the process emphasizes divergent efforts, constantly exposing new approaches and alternatives, it also capitalizes on completely illogical or unorthodox contributions. The cycle separates people from their ideas by requiring a rotation of contributor personas: movers, opposers, followers and bystanders (The Kantor Institute, 2013).

The brainstorming cycle creates a culture of inquiry, keeping ideas evolving and new evidence explored. It encourages a desire to change, alter opinions and challenge theories. It sparks an emotional charge, igniting a curiosity to recognize problems and a sustained action to solve them. People dig for facts, form ideas and suggest solutions.

Putting the cycle into action, consider an idea that’s deemed a social issue, and then identified for finding a social solution for the lateral thinking brainstorming process.

The idea entered: “There’s too much violence.” Participants accept it from multiple cultures, suggesting a global problem. Resources may be available to reduce violence. As the brainstorming cycle begins its rotations, a mover purposes an idea that criminologists suggest a link between violence and political corruption. An opposer says conspiracy theorists find corruption where it doesn’t exist. A follower asks how we’re defining corruption, such as opinions or indictments. A bystander explains how he has high political corruption in his country, but murder is uncommon.

The system of inquiry continues with participants constantly change roles. Ideas are tallied. A purposed solution that explored 1,000 ideas is considered more meaningful than one with 10. The group tests each solution for truth, rightness and sincerity. In the theory of communicative action, every act of speech that strives for mutual understandings consists of these validity claims (Habermas, 1985, p. 99). Claims of truth must pass the test of continued discourse, as conversationalists carefully examine evidence. Rightness is tested through discussing what we ought to find acceptable, legitimate and moral. Sincerity is confirmed by probing the actions of those sharing their ideas. Mutual appreciation of the final solution requires a claim to pass the validation test of each participant in the system. What’s more, accepting a blending of ideas requires comfort in the actions the new understanding implies. Lastly, the solution would be labeled as permanent or temporary. Will it cure mankind of violence for eternity, or offer a temporary patch?

The problem-solving process completes when the creative thinking cycle stops, and an agreed solution unfolds. The group submits its solution to the gatekeepers of a domain.

There’s still a lot of work required. While I’ve presented a potential a back-end framework to evolve social media, I’ve yet to explore an appropriate delivery vehicle. I’ve learned to resist the idea that a powerful system is of a single design, but the result of many innovative micro systems. It seems likely the front-end programming should embrace a multimedia approach to information sharing – photos, videos, documents, presentations – while relying on explicit and implicit user-generated content. Possibly our best collaboration in participatory media to date occurs in Wiki platforms, where volunteer content creators combine, adapt, magnify, put to other uses, eliminate and rearrange. As participants, they accept ownership in each final project. Creative thinking is teachable, but highly dependent on environment. Given the right network of systems and motivation to think collectively, social media’s next step toward a more collaborative framework is inevitable. When it happens, we’ll wonder how mankind ever survived without it.

Greenemeier, L. (2009, March 10). Computers have a lot to learn from the human brain, engineers say. Retrieved May 4, 2013, from ScientificAmerican.com: http://www.scientificamerican.com/blog/post.cfm?id=computers-have-a-lot-to-learn-from-2009-03-10

Naone, E. (2010, September 28). What Twitter Learns from All Those Tweets. Retrieved May 2, 2013, from MIT Technology Review: http://www.technologyreview.com/view/420968/what-twitter-learns-from-all-those-tweets/

Scharmer, O. (2009). Theory U, Leading From The Future as It Emerges. San Francisco: Berrett-Koehler Publishers, Inc.

The Human Brain Project. (2013, May 2). Introduction. Retrieved May 2, 2013, from HumanBrainProject.eu: http://www.humanbrainproject.eu/introduction.html

2 thoughts on “Collaborative Media: What’s Wrong With Social Media, How We Might Fix It?”