An explanation of her boyfriend’s continued carnage was presented Sept 24 at Patriot Learning Center. The horrific mutilation on a trail in Manitou Springs, involving “sticks and a boulder,” sparked a somber embrace for several students. Some cried.

“She was the age of some our freshmen here, so it’s really relatable,” said 12th grader Celine Inge, 17, standing near a life-size cutout of a female figure, constructed of plywood and painted red. Hanson’s story was hung over the figure’s shoulders with a ribbon.

The school’s gymnasium housed 37 plywood cutouts, shapes resembling men, women and children. A group of its high school students had fastened 82 round cardstock placards onto the figures with ribbons, displaying deadly stories of domestic violence.

Its educators emphasize community-mindedness and service. Earlier this month, a social studies class honored Patriot Day and National Day of Service and Remembrance by creating a collage of artwork that symbolizes Martin Luther King Jr.’s iconic “I Have a Dream” speech. They discussed King’s concepts and the need for national unity after 9/11.

The domestic violence project covered more than 20 years of cases in El Paso County and nearby Teller County. Victim stories were provided by TESSA, a nonprofit organization in Colorado Springs that helps families besieged by violence, while inspiring communities to end it.

“A lot of people don’t know this is going on behind closed doors before it’s too late,” said Inge, one of several student volunteers who created this year’s display, which will support TESSA’s silent witness march next month.

It’s been six years since social studies teacher Susie McPherson started the school’s annual community project. It began with roughly 40 stories, and grows every year. Students who volunteer for her “white shirt brigade” must read each victim’s story, she said. 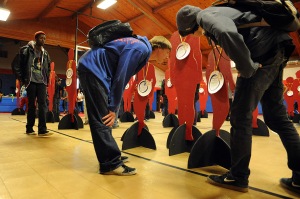 “These are the stories that families allowed us to share – there are a lot more,” said Inge, wearing a white shirt with red handprints and black marks, surrounding the phrase “It Stops Here.”

“It’s hard to do,” she said. “But I think it’s really important to give these people a voice.”

In October, they’ll deliver their handmade tributes to local libraries. They’ll exhibit as many as possible, for as long as possible, said McPherson.

“I always tell my students, ‘if we can help one person, it’ll all be worth it,’” she said.

“They were with someone they felt safe with, felt comfortable with, who ended up being their undoing,” said 18-year-old Mitchell.

“Just the thought of it,” he said.

“It’s enough to want to do this.

“We’re speaking for people whose voices were taken.”