Hornberger is the nutrition services manager at Skyview Middle School, where breakfast is now offered for a second year. Each morning, the cafeteria typically caters to 60-70 students, of which about two-thirds arrive almost daily.

“Sometimes, I just come in for a small yogurt so I can be focused,” said sixth grader EJ Sutton, 11, while eating breakfast with several friends talking about their favorite sports teams.

“It’s always nice to see our students excited to come in,” said Hornberger, explaining how the program’s participation, which costs $1.25 per meal, quickly doubled its first year.

The school’s successful breakfast program is a big reason why it received a $2,500 Colorado Healthy School Champions award this year, according to Tony Marino, physical education teacher. He leads the coordinated school health team at Skyview Middle School in Falcon School District 49.

The Colorado Legacy Foundation, an independent nonprofit organization that’s partnered with the Colorado Department of Education, administers the grant. A scorecard, designed in collaboration with Colorado Coalition for Healthy Schools, examines best practices.

“In order to get that grant, we had to show that we had established a coordinated school health team at Skyview,” said Marino. “The breakfast program, physical education, staff wellness – we talk about all that in our school health improvement plan.”

The grant asks schools for specifics. While explaining innovations in integrating physical fitness, Skyview Middle School was highlighted as a state champion in archery.

“Archery offers a unique way to get kids involved in PE,” said Marino. “Not too many schools have archery, and the funders from this grant did see that.”

“It’s a lot of fine motor skills,” he said. “It’s a lot of cognitive processing. Believe it or not, we do a lot of math … we talk about a lot of science concepts as well.” 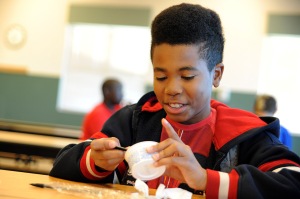 But it all starts with breakfast.

“I’ve had kids specifically come up to me and say they have more energy throughout the day… they’re more focused in the classrooms,” said Marino, who estimates that about 10 percent of the school’s roughly 1,000 students are currently eating school breakfasts.

“I stress that breakfast is the most important meal of the day, and they’re starting to see that,” he said.

Marino said the school received the grant last May, and its coordinated school health team began meeting two days ago. They’ll continue to brainstorm ideas for how to best spend the money, and they’ve recognized a need to gather more student feedback.

“We’re evaluating how this money will be best used to impact our children,” he said.