Soldiers who are ready for non-commissioned officer promotions must attend WLC, which is open to all occupational specialties. Graduation from WLC, or an equivalent course, is required for a recommendation to staff sergeant, according to Army Regulation 600-8-19, Enlisted Promotions and Reductions.

“We’re trying to make the training as realistic as possible.”

“(The WLC students) have to work off an actual operations order,” said Henry. “Based on that operations order, we issue fragmentation orders. They then conduct a course that includes opposition fire, (improvised explosive device) simulations and medevac procedures, ground and air.”

“You never know,” said Noga. “When you get deployed everything can go haywire, and you don’t know what to do. Everyone should have sufficient knowledge of medevacs and be proficient at it.” 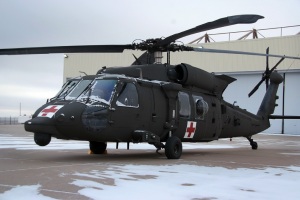 “It’s great training for us,” said 1st Lt. Derrek Montoya, Company F, 7th Bn., 158 Avn. Reg., while waiting for a call from classroom six with his pilot-in-command, crew chief and medic. “We get to do our whole routine — run-up and getting ready. If we get deployed, this is what we’d be doing.”

“The more we can throw at them here, in a training environment, the more prepared they’ll be … when we deploy,” said Bright, regarding the medevac crews. The standard reaction time to a nine-line is 15 minutes, he said, but the company often rehearses responses to urgent calls in less than 10 minutes.

“The more we can throw at them here, in a training environment, the more prepared they’ll be … when we deploy.”

While the two squads assigned to classroom six were walking “humanitarian aid” through an icy gorge in subfreezing temperatures, a training-IED detonated, covering mud and snow in a cloud of white powder.

While securing the area, a “combatant” appeared about 50 feet from their beaten path, firing blanks from an M16 rifle. The soldiers returned fire, simulating enemy engagement. Before the exchange ended, a WLC small group leader tapped a soldier for evacuation, calling him a gunshot wound. The soldier dropped.

After the Black Hawk landed, Sgt. Matthew Larson exited the aircraft, handed his headset to his crew chief, grabbed a handheld radio and met up with soldiers. The combat medic asked for more information about the “wounds,” assessed the casualty for quick treatments, and then adjusted and tightened their litter.

“We’re trying to make it as real as possible,” said Larson, who has deployed to Iraq as a ground medic. He has a bachelor’s degree in emergency response medical services and experience with hospitals and aircraft. “The biggest thing is talking through it … speaking from experience to the guys that haven’t done it before.” 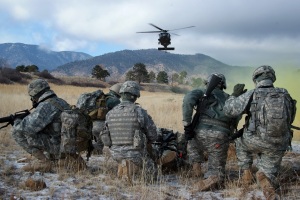 “It’s really loud,” said Daniel. “The wind is blowing. You’re trying not to get your head blown off and your heart is pumping. It really helps when you get that type of training … when you do it in real life, it’s not so jarring — so you won’t get someone killed.”

Daniel first practiced loading a simulated casualty onto a Black Hawk at the Joint Readiness Training Center in Fort Polk, La., while preparing for his first combat deployment to Afghanistan in 2010. During the training, he tripped and dropped a litter. However, successful medevacs get easier with practice, he said.

“As you do it more, you get more used to it and you’re not as scared. Less things can go wrong.”

“A lot of people haven’t been in training situations where you actually have (helicopters),” said Noga. “This is giving people a better feeling of what it’s like to actually evacuate a casualty in combat. … The more you practice back home, the better the chance you have of saving your battle buddy’s life.”