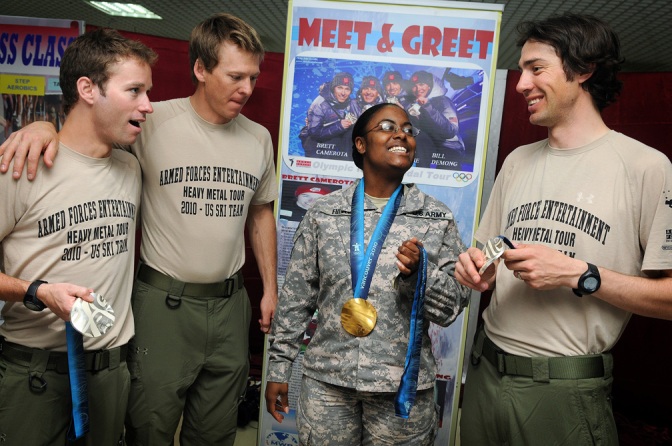 Olympians traveled to Qa­t­ar on April 8 to show servicemembers the first medals earned by the U.S. Nordic Combined Ski Team after 86 years of Winter Olympic competitions.

Four skiers are placing seven Olympic medals, one gold and six silvers, around the necks of U.S. servicemembers in the Middle East as part of the first Armed Forces Entertainment Heavy Medal Tour. The athletes won the medals at the 2010 Vancouver Olympic Games in February. 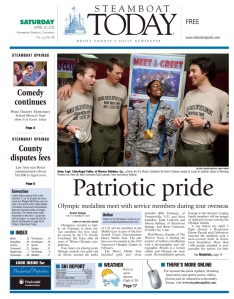 Rob Powers, founder of The Warrior Tours, is leading the journey of military installations with a photographer and videographer. Powers is a former soldier and Olympic ski team coach. He immediately uploads footage to the Internet, hoping family members will see images of deployed troops wearing the Olympic medals.

A day before the April 3 flight abroad, a Hometown Heroes Parade and Celebration honored the medalists atop a snow-covered street in downtown Steamboat. More than 1,000 people attended to congratulate the natives for their Olympic accomplishments and wish them well overseas.

The 12-day military appreciation tour started at U.S. Navy facilities in Bahrain, an island country in the Persian Gulf. The athletes sailed the warm, salty waters to visit service members on an oil platform and USS The Sullivans, a more than 2,000-ton Fletcher-class destroyer.

After three days in Bahrain, the skiers flew 80 miles southeast to Qatar, a small peninsula nation protruding from the east coast of Saudi Arabia.

“It has been a really busy 72 hours,” said Demong, who earned the gold medal at an individual large hill Gundersen event Feb. 25. “But we planned for it, looked forward to it, and canceled all other plans. The experiences have been awesome.” 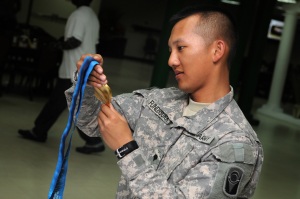 “The medals are really heavy,” said U.S. Army Capt. ChrisAngel Fuller, of Warner Robbins, Ga., while holding the 500-gram medallions at Camp As Sayliyah, Qatar. They are 10 centimeters in diameter and mostly made from silver.

“It’s nice of them to let us touch the medals — on television they seem so surreal,” said Fuller, who recalled watching televised coverage of curling, bobsledding and ski jumping events during the Olympic Games.

“Soldiers and Olympians have to maintain good physical shape and learn to face their fears,” she said.

Demong, 30, is a four-time Olympic athlete who first competed at age 17. He said he noticed several similarities between serving in the military and competing in the Olympics, such as representing your country overseas, spending time away from home and undergoing rigorous training.

“When it’s the World Cup, World Championship or Olym­pics, sometimes the competitions go on when the weather is subpar,” Demong said. “You want to do your best even in dangerous conditions. The guys who do well are those who are able to stay focused on the task at hand, despite wind and fog.”

“They make some amazing sacrifices to perform at the Olympic level,” said Lt. Col. Paul Davidson, of Wyandanch, N.Y. “I see in them a selflessness and camaraderie similar to what we inspire in our soldiers.”

“They make some amazing sacrifices to perform at the Olympic level. I see in them a selflessness and camaraderie similar to what we inspire in our soldiers.”

“The guys are having the time of their lives,” Powers said about the medalists. “And that’s coming from someone who’s been with them for more than a decade. Each one is a true patriot.”

“Next, we’re going to do what I call the ‘Baghdad shuffle,’” said Powers, referring to visiting troops serving in several locations around Baghdad, Iraq, the tour’s final location.