Mohammad Saleh Nishwar, 79, has sold merchandise at Souq Waqif in Doha, Qatar, for more than 60 years. His family-owned store, about the size of a parking space, hasn’t budged in almost 100 years. Reconstruction projects have protected its cultural merit, as part of the oldest trading area in Qatar. Across the street, soaring temples of trade, banking, hospitality and governance are rising from the desert sands, fertilized by seemingly endless fossil fuels. Aside from considerable oil reserves, Qatar has proved 900 trillion cubic feet of natural gas, the largest single gas field under the earth’s crust.

Qatar is a contrast of elements: dull, beige land meets sparkling, blue water. The country protrudes into the Persian Gulf from the Arabian Peninsula. Sand and compact bedrock cover 4,416 square miles. Occasional patches of trees and grass endure the dusty surroundings, which soak up only a few inches of rainfall each year. There are no rivers or lakes, only saline swamps from changing oceanic tides.

More than 1.4 million people reside in Qatar, according to United Nations’ estimates in 2009. Qatari nationals represent less than 200,000 of the residents. A metropolis is emerging from the desert environment by employing an enormous expatriate workforce, mostly Arab, Indian, Pakistani, Iranian and African. The latest Qatar government population census, 2004, revealed 1,250 men over 75 years old; 540 are in Doha, the capital and most populated city.

Few elderly men are willing and able to readily recall working in Qatar before oil exports advanced the nation. Nishwar is one of them. Like a palm tree rooted in the parched sands, the third-generation Qatari survived conditions that caused many others to wither and run. The Muslim has never been a religious, tribal or military leader. Most of Qatar’s early merchants, he says, only cared about selling their goods and feeding their families.

Nishwar describes himself as an uncomplicated, uneducated man. The burly old shop owner always dresses in loose-fitting thobes, traditional white-colored garments that extend to the wrists and ankles. His frosted eyebrows and mustache are accented by a sun-bronzed complexion. He speaks Arabic using a Gulf-specific dialect; his hands move to the rhythm of his voice.

“You only divorce if they’re stubborn,” said Nishwar, who has married three times, divorced twice and fathered 12 children. “If they argue a lot, make problems and don’t listen to men.” His view of marriage derives from living in rigid communities with predefined roles. Women contribute devotion and enthusiasm as mothers and wives. Men supply security and wealth.

You only divorce if they’re stubborn. If they argue a lot, make problems and don’t listen to men.

In 1914, Nishwar’s grandfather established the family business at Souq Waqif, an Arabic phrase for “standing market.” People often bought and sold goods while standing on the banks of the Wadi Musheireb, a stream of water that broke inland every winter. Nishwar’s family shop rests on a patch of elevated land in the Farigh an-Najjadah, the district south of the Wadi. Merchants there enjoyed security from high tides, but the cool season’s occasional rainfalls easily eroded their feeble walls. His grandfather originally offered oils, spices, rice, beans, wheat, dates and other foodstuff.

Inhabitants littered Qatar’s eastern inlet with rectangular rock structures. Mosque minarets towered over the landscape, calling Muslims to prayer five times each day. Abdallah Bin Jasim Al Thani, Qatar’s ruler between 1913 and 1949, had the most prominent home, amongst hundreds of simple one-story dwellings. He used his palace for personal and state affairs.

Qatar’s early economy depended on relentless harvesting of saltwater pearls. Fearless crews routinely lost men to sharks and barracuda, as well as illnesses caused by repetitive deep-sea diving using stones tied to their feet. Divers made dozens of descents a day – reaching depths up to 200 feet.

Nishwar’s father eventually took over and shifted the trade line to mostly diver’s materials. Customers, often neighbors, approached him for nets, nose plugs, ropes, as well as baggy diving suits that offered protection from stinging jellyfish. Items were requested from his front hatch – nobody entered; not even his children.

Nishwar was born in Doha, 1931. His grandmother provided midwife services during his delivery; a task his mother also learned. His birth coincided with a retreat in Qatar’s recent population surge – more than half the country’s inhabitants left in the 1930s, as a worldwide depression matured. Qatar’s stumbling saltwater pearl trade gave in to Japan’s introduction of cheap cultured varieties.

Similar to the family store, Nishwar’s home combined irregular-shaped boulders with fragments of sea coral and shells. Mud and sand sealed the collage. The massive walls, almost two feet thick, led up to a multi-layered roof of mostly imported parts. 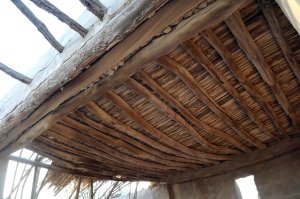 The ceiling consisted of round timbers, roughly three inches in diameter, spaced about a foot apart. Mangrove slats ran perpendicular to the rods. A mangrur, matting woven with palm fronds, was rolled over the framework. Finally, a mixture of straw and mud, using well water, was poured on top.

Every residence in Doha had at least one room with a separate “majlis,” an Arabic word for a place of sitting. The area allowed men to receive and entertain guests, away from their wives and children. No matter how poor the family, everyone had a separate majlis, said Nishwar.

Before building a home, husbands rallied support from their neighbors. They’d walk door-to-door, explaining their plan to build in Doha. Single-room dwellings took four to five days for the men to assemble. Afterward, homeowners thanked their neighbors by offering dates, bread and laban, a dairy product similar to yogurt.

Nishwar’s mother was the first to awake each morning. She’d step outside, ahead of the blistering sun, to fetch water from wells in groups of five or six women. The aromas of fresh flat bread and hot tea filled the home prior to 7 a.m. She increased rations through lunch and dinner, with the largest feast at night. Food was always cooked in the courtyard. Most meals consisted of fish, lamb, rice and bread.

Nishwar’s father opened his store at 8 a.m. Two hours later, sifting through the scorching sand, he returned home for lunch. With a satisfied appetite, his wife fanned him to sleep. Merchants returned to work after performing ablutions and noon prayers. Strict laws prohibited working past 5 p.m.

Camels are included in some of Nishwar’s earliest recollections. The enormous beasts hauled water to hefty wholesale traders. At around five years old, a herder placed him on a camel’s back, but he fell off after becoming startled by its movement. The memory would make him laugh for more than 70 years.

A modern education system didn’t exist during the Qatari’s primitive upbringing. At around eight years old, Nishwar started learning to read and write in “kuttabs,” informal classes taught in the residences of literate Muslim men. He walked between two homes: one taught Arabic using a slate and chalk; the other studied the Koran, Islam’s holy book.

Abdul Aziz Al Saud, established Saudi Arabia in 1932 and accepted the benefits of both telegraph and telephonic services. Years earlier, he proved to religious leaders that radios couldn’t be the work of the devil by broadcasting a person reading the Koran. A religious decree was issued to explain that telegraph systems did not contradict Islamic values.

Nishwar, and a dozen other boys, squandered several evenings eavesdropping on radio broadcasts in Doha. Only three houses had electricity: Salih Al Mana, Abdalla Darwish and Muhammad Al Uthman. The kids quietly piled up against their walls, eagerly listening for music, news and stories. Nishwar paid attention even when he didn’t understand the languages, hoping an Arabic version would return.

“It was a beautiful, simple life,” said Nishwar. “Everything was close to home and everyone knew each other. There were no telephones, no televisions, no cars – everything came after the oil.”

It was a beautiful, simple life. Everything was close to home and everyone knew each other. There were no telephones, no televisions, no cars – everything came after the oil. 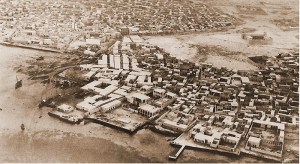 An aerial photograph of Doha, Qatar in 1947.

Oil was first discovered in the western settlement of Dukhan, 1939. Around 3,000 miles away, Adolf Hitler had invaded Poland. World War II progressed and allied strategies called for safeguarding oil reserves in Arabia in 1942. Qatar’s economic hardships had been prolonged by foreign wars using millions of troops, 40-ton tanks, 30,000-ton battleships and atomic weapons.

Radios became more common as Qatar ascended as a sovereign Arab-Islamic state. Nishwar recalls hearing broadcasts from Pakistan, India, France, England and United States. Several elderly merchants inside a majlis constantly asked him where the voices came from, while searching for cables, wires or ropes – some resemblance of a conduit. They called the radios a “sandoq sehri,” an Arabic phrase for a “magic box.”

“They told us ‘this thing will make you crazy,’” said Nishwar, stressing that most were illiterate. “Only one man knew how to dial a station. If he didn’t show up, the radio stayed off.”

“After the oil, everyone came back to Qatar,” he said. “Everyone scattered everywhere. To this day, if you didn’t need something, you wouldn’t sit with me.” Nishwar has carefully scripted poetry for more than 50 years; countless hours of loneliness are dedicated to inspiration about nature, beauty and women.

Various renovation projects have modernized Souq Waqif. Walls and ceiling are made from re-enforced concrete. Salesrooms keep cool using air-conditioners. The walkways that connect shopkeepers use polished stone. Land reclamation filled in the Farigh, thereby pushing the ocean 1,000 feet away. The reshaped coastline resulted in a waterfront promenade known as the Doha Corniche. Today, a paved street runs through remnants of the Wadi valley.

“Everything evolved after the oil,” said Nishwar, who stocked the family shop with textiles after his father’s death in the 1960s. Fabrics, clothes and prayer rugs surround him today, inside a sales floor permitting space for only a couple patrons. Radio static sometimes scratches in the background.

“Education is much better now,” said Nishwar. “We are always learning from our children. When I look at the television and don’t understand it… I ask the little one and he tells me all about it. Sometimes I call them from bed to teach me new things.”

“If I had the same education, I wouldn’t still be sitting here, like this, in this shop.”