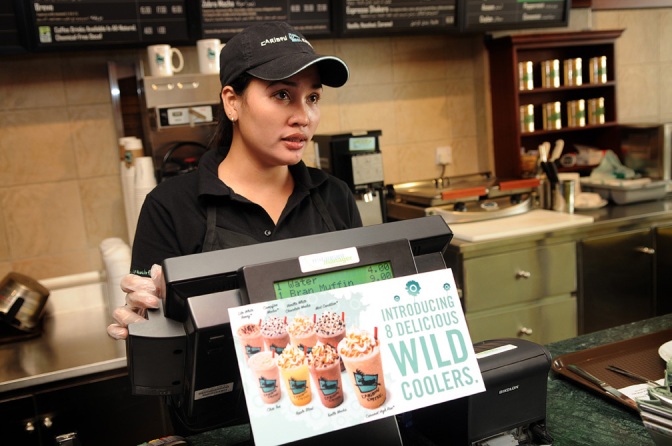 Qatar got a taste of Minnesota recently. Caribou Coffee opened earlier this year. The atmosphere is consistent with the warm cabin-like Midwest atmosphere and it even affords free wireless Internet. Sitting in the dining room almost makes me feel like I’m in Minnesota… well, save for the Filipino girl taking orders and the Sri Lankan gentleman brewing up “the best cup of coffee in the world”… oh, and the Arabic translations for names and Qatari Riyal prices on the large overhead menu. Close enough! Two locations just opened and the employees are quick to tell people that it’s a Minnesota-based company. The Midwest scores in the Middle East!

This is the translated menu, as it appeared soon after the coffee shop opened in Qatar: 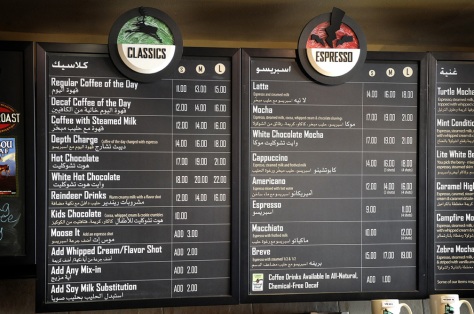 “This is my first time meeting a Medal of Honor recipient,” said Army Sgt. Edward Schaible, from Howell, N.J. “It’s an honor to meet someone who put their life on the line to save others during a time of war.”

Schaible met the recipients while enjoying a brief break from duty in Iraq, by participating in the U.S. Central Command rest and recuperation pass program in Qatar.

“Their courage is inspirational for anyone placed in a situation where they must risk their life to save the lives of others,” said Schaible.

“I enjoy seeing their smiling faces and the opportunity to thank them for the job their doing,” said Littrell. “We do this every April; it’s an important trip for us.”

Littrell earned his Medal of Honor while serving within Vietnam’s Kontum province, near Dak Seang, April 1970. Twenty-nine years have passed since the Army sergeant first class displayed indomitable courage in order to prevent excessive loss of life and injury after surviving an intense enemy mortar attack. Amidst seemingly superhuman endurance, he survived a four-day struggle to support a severely weakened battalion. Littrell continuously moved into areas under fire to distribute ammunition, strengthen defenses and care for the wounded.

While in Vietnam, Howard was recommended for the Medal of Honor on three separate occasions during a 13-month span of service. The first two were downgraded to the Distinguished Service Cross. He finally received the top military medal for selfless actions as a 5th Special Forces Group platoon sergeant in December 1968. Strong enemy engagement left the Army sergeant first class severely wounded and his weapon destroyed by a grenade explosion. Amid the chaos, Howard noticed his platoon leader had been seriously wounded and remained exposed to fire. Weaponless and unable to walk, he unhesitatingly crawled through a hail of fire to retrieve his fallen leader at the risk of his own life. Howard continued to crawl in an effort to administer first aid to anyone injured, while encouraging and directing fire on an encircling enemy.

“Hearing about their experiences offers us a wealth of knowledge,” said Army Staff Sgt. Samuel Slown, from Clarksville, Tenn.

He is a 5th Special Forces Group Soldier– the same unit Howard was assigned to when he earned his Medal of Honor in Vietnam.

“The things they survived paved the way for today’s special forces community.”

According to Slown, 5th Special Forces has awarded 14 Medal of Honors, half were presented posthumously.

“They’ve been through the fight and understand our sacrifices,” said Air Force Lt. Col. Andrew Samerekovsky, from Bedford, Ohio, while finishing a four-day pass from duty in Iraq. “We appreciate all the celebrity support tours, but this visit has an entirely different level of meaning. This was a great surprise.”

We just returned to Doha after nearly a week at the Sheraton Full Moon Resort in Maldives, situated southwest of Sri Lanka in the Indian Ocean. The Republic of Maldives is a Islamic state consisting of over a thousand islands, of which two hundred and fifty islands are inhabited. All major spots – the capital city, fisherman docks, resorts – have their own little island, nearly all are nestled within coral reefs. Most of the tourist we met were from Europe and the Middle East.

Even the airport has it’s own island. When you arrive, you walk out to a pier to locate your hotel’s speed boat. Some of the more distant locations warrant hoping on a puddle jumper to get there faster… not to mention, even from the height of a commercial airline, the view of the islands is amazing. Hundreds of islets poke out of countless reefs. END_OF_DOCUMENT_TOKEN_TO_BE_REPLACED

Haynes and U.S. Army Maj. Isaac Peay, from Cassatt, S.C., were participating in the U.S. Central Command rest and recuperation pass program in Qatar, a Gulf state located along the eastern coastline of the Arabian Peninsula. During their four-day pass from duty in Iraq, U.S. Army Master Sgt. Gregory Lewis-Seals, from Dewitt, N.Y., sponsored them to leave the U.S. military installation and witness a popular local past time: camel racing.

“Today we use robots but I was a camel jockey as a child,” said Ali Nasser Al Naimi, a Qatari camel owner and trainer who travels to the Al Shahaniyah race track nearly every day. Camels require constant encouragement to keep running. Amid pressure from human rights activists, Hamad bin Khalifa Al Thani, Qatar emir, ordered child camel jockeys to be replaced with robots in 2003 – capturing interest from robotics corporations in United States, Europe and Japan.

“Our first robots were from Switzerland,” said Naimi. “They were too heavy – around 25 kilograms – and their whipping technique didn’t make the weight worth it. Eventually, we received robots from United Arab Emirates that weighed less than three kilograms. They were designed using a common drill motor, rechargeable batteries and a whip – everything assembled to look like a little man. The final robots gave us better performance with fewer injuries to both humans and camels – by far.” According to Naimi, the fastest camel’s record was beaten by over a minute with the introduction of the new technology.

“A camel’s value is based on how well it performs,” he said. According to Naimi, racing camels are generally worth around $20,000 to $275,000. The fastest camels in Qatar are frequently valued over $300,000 – top performers can reach over $2 million.

“Sadly, my camel is showing the beginning signs of sickness today,” said Naimi, driving alongside the race track with Haynes, Peay and Lewis-Seals along for the ride, watching his camel try to keep up. “I can tell he’s getting ill by how poorly he’s running,” said Naimi, controlling the robotic jockey’s whip from his car and talking to the animal through an integrated audio receiver. His camel was trained to respond to verbal commands, to include its name.

“Being in a camel owner’s car during a race was fascinating,” said Peay. “Some camels gave out, while others sped up. I saw one really pick up its stride. Everyone was controlling their robot jockeys with remotes and cars were getting all mashed together – it was wild!”

“The camel races put us in an entertaining and relaxing environment,” said Peay. “I enjoyed Qatar’s weather and generous people. Coming to an event that’s important to our host nation is good for building relationships. When they see us here, they see us taking an interest in their lifestyle.”

“This was a great opportunity to enjoy Arabic culture in a peaceful atmosphere,” said Haynes. “I brought a camcorder to show my kids a video of how fast camels can run.” 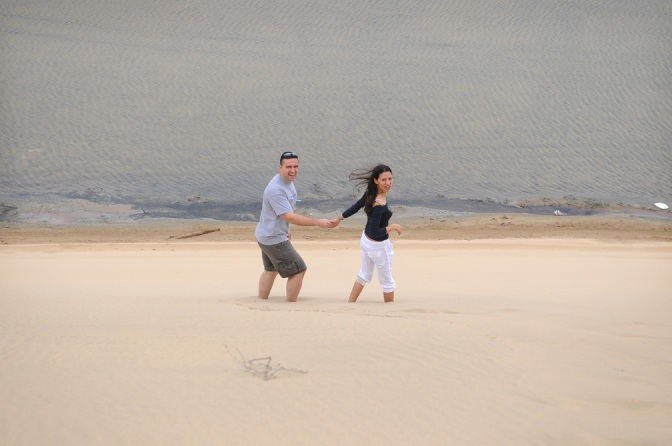 Laila visited a laser surgeon for aesthetic skin care treatment. She had been thinking about it for long time. Aside from her upcoming step into the 30s, she’s concerned about the extreme weather in Qatar giving her skin a rough time. After some research, I endorsed the laser light therapy. When looking at the cost-to-benefit ratio, it’s probably cheaper and more effective than the various creams and spa packages.

The doctor was an Iraqi laser surgeon. He was very polite, helpful and accommodating. According to the surgeon, the laser light treatment helps with blackheads, flaking skin, acne scars, fine lines and wrinkles. He said the treatment’s effectiveness is largely attributed to stimulating the growth of new skin cells and collagen. It’s like using an eraser to remove fine lines, as long as the patient is young enough to rejuvenate a significant amount of collagen. After the procedure, new collagen growth tightens the skin. Some patients see results immediately. Everyone sees gradual results over a three- to six-month period. END_OF_DOCUMENT_TOKEN_TO_BE_REPLACED

CAMP AS SAYLIYAH, Qatar – “We want to work ourselves out of a job,” said Rick Hunt of Newark, Ohio, Dec. 23., while standing inside the Stryker battle damage repair facility at Camp As Sayliyah, Qatar.

A recent decrease in combat-damaged Strykers led to discussions about the fate of the repair facility at the U.S. military installation in Qatar. A new mission was needed to retain the forward-located team of experienced mechanics, welders and material controllers. In November, discussions between U.S. government and GDLS officials shifted the focus of the site to refurbishing, or “resetting,” worn out Strykers on battlefields. END_OF_DOCUMENT_TOKEN_TO_BE_REPLACED

We recently returned to Qatar from my 30th birthday celebration in Sri Lanka. Around 45,000 people employed in Qatar are from Sri Lanka. The Gulf country is known for its precious pearls, while Sri Lanka is often referred to as the “Pearl of the Indian Ocean.”

Sri Lanka is an island nation 19 miles off the southern coast of India, roughly the size of West Virginia. Of the more than 20 million people, about 1.3 million live in and around Colombo, the nation’s capital city. Outside Colombo’s busy business districts is a country packed with tropical rain forest, wildlife and national heritage. Sri Lanka’s beaches are popular venues for surfing. In the ocean, boats take tourists to see migrating blue whales. The enormous sea creatures reach lengths around 110 feet and weights of 200 tons. END_OF_DOCUMENT_TOKEN_TO_BE_REPLACED 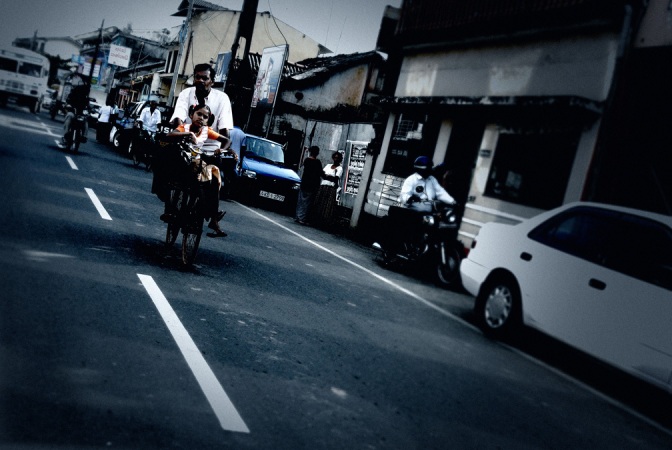 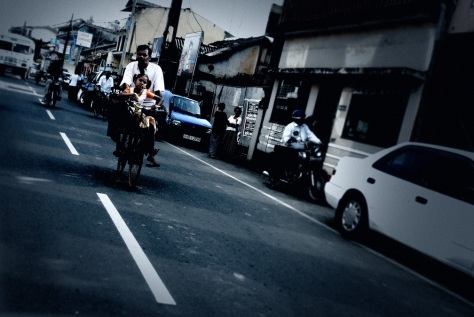 A local man and his daughter ride a bicycle down a main street in Galle, Sri Lanka, Feb. 8, 2008. A surge in Tamil Tiger activity and civil unrest had left wild life parks and safaris were closed. However, the people inside the seaside town of Galle were moving about without expressing much worry. An overcast of poverty surrounded cost-effective solutions to every day situations. The area had been hit hard by the tragic December 2004 tsunami in the Indian Ocean. This dramatic film-like effect helps capture the city life by stripping off the bright, hard lights. That dreary economic overcast is represented by dark, cool colors and softened shapes. END_OF_DOCUMENT_TOKEN_TO_BE_REPLACED

Recently, I met a prominent person in Qatar: the morning disc jockey. Many people complain about Qatar Broadcasting Station’s content, but this is expected since an Islamic state is deeply regulated for public modesty. He is a talented jockey with a long history in the entertainment industry. He’s committed to keeping within the standards imposed on him. Bernie Lyons is also a devoted family man.

Lyons hosts the QBS “Breakfast Show” on FM 95.7, from 6 a.m. to 9.am. His early-morning silliness, laced with an Irish accent, is hard to ignore. Lyons is capable of generating smiles without becoming offensive to anyone; a mandatory trait while broadcasting in an Islamic nation. His show delivers a necessary distraction during frequently frustrating commutes in Doha, Qatar’s capital city. END_OF_DOCUMENT_TOKEN_TO_BE_REPLACED

Qatar, an Islamic nation situated on the eastern coast of the Arabian Peninsula, is a constitutional monarchy ruled and administered by an emir. Hamad Bin Khalifa Al Thani holds absolute power over one of the richest countries in the world. Today, Qatar exhibits a glamorous and prosperous nation, but it wasn’t always this way. The Al Thani royal family understands success is a product of struggle. END_OF_DOCUMENT_TOKEN_TO_BE_REPLACED

What’s wrong with social media, and how might we fix it? END_OF_DOCUMENT_TOKEN_TO_BE_REPLACED 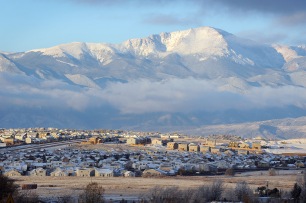 “Those who want to grow rich in a day live for a long time in great poverty.”