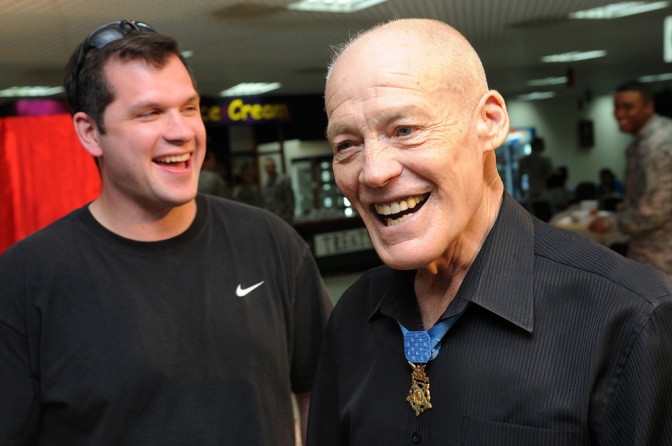 “This is my first time meeting a Medal of Honor recipient,” said Army Sgt. Edward Schaible, from Howell, N.J. “It’s an honor to meet someone who put their life on the line to save others during a time of war.”

Schaible met the recipients while enjoying a brief break from duty in Iraq, by participating in the U.S. Central Command rest and recuperation pass program in Qatar.

“Their courage is inspirational for anyone placed in a situation where they must risk their life to save the lives of others,” said Schaible.

“I enjoy seeing their smiling faces and the opportunity to thank them for the job their doing,” said Littrell. “We do this every April; it’s an important trip for us.”

Littrell earned his Medal of Honor while serving within Vietnam’s Kontum province, near Dak Seang, April 1970. Twenty-nine years have passed since the Army sergeant first class displayed indomitable courage in order to prevent excessive loss of life and injury after surviving an intense enemy mortar attack. Amidst seemingly superhuman endurance, he survived a four-day struggle to support a severely weakened battalion. Littrell continuously moved into areas under fire to distribute ammunition, strengthen defenses and care for the wounded.

While in Vietnam, Howard was recommended for the Medal of Honor on three separate occasions during a 13-month span of service. The first two were downgraded to the Distinguished Service Cross. He finally received the top military medal for selfless actions as a 5th Special Forces Group platoon sergeant in December 1968. Strong enemy engagement left the Army sergeant first class severely wounded and his weapon destroyed by a grenade explosion. Amid the chaos, Howard noticed his platoon leader had been seriously wounded and remained exposed to fire. Weaponless and unable to walk, he unhesitatingly crawled through a hail of fire to retrieve his fallen leader at the risk of his own life. Howard continued to crawl in an effort to administer first aid to anyone injured, while encouraging and directing fire on an encircling enemy.

“Hearing about their experiences offers us a wealth of knowledge,” said Army Staff Sgt. Samuel Slown, from Clarksville, Tenn.

He is a 5th Special Forces Group Soldier– the same unit Howard was assigned to when he earned his Medal of Honor in Vietnam.

“The things they survived paved the way for today’s special forces community.”

According to Slown, 5th Special Forces has awarded 14 Medal of Honors, half were presented posthumously.

“They’ve been through the fight and understand our sacrifices,” said Air Force Lt. Col. Andrew Samerekovsky, from Bedford, Ohio, while finishing a four-day pass from duty in Iraq. “We appreciate all the celebrity support tours, but this visit has an entirely different level of meaning. This was a great surprise.”