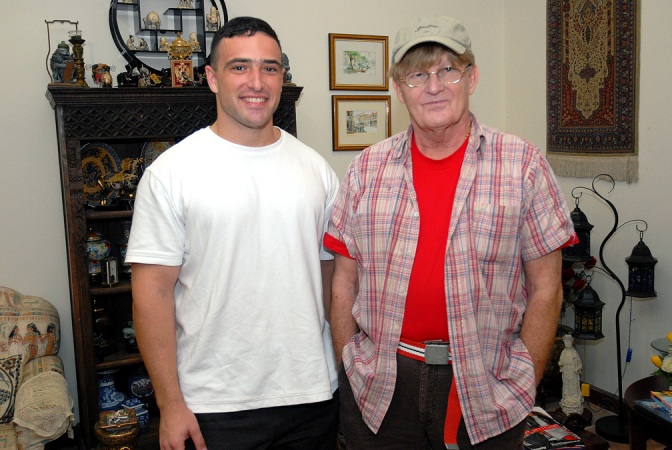 Recently, I met a prominent person in Qatar: the morning disc jockey. Many people complain about Qatar Broadcasting Station’s content, but this is expected since an Islamic state is deeply regulated for public modesty. He is a talented jockey with a long history in the entertainment industry. He’s committed to keeping within the standards imposed on him. Bernie Lyons is also a devoted family man.

Lyons hosts the QBS “Breakfast Show” on FM 95.7, from 6 a.m. to 9.am. His early-morning silliness, laced with an Irish accent, is hard to ignore. Lyons is capable of generating smiles without becoming offensive to anyone; a mandatory trait while broadcasting in an Islamic nation. His show delivers a necessary distraction during frequently frustrating commutes in Doha, Qatar’s capital city.

Originally from Ireland, Lyons is deeply rooted in the entrainment industry. Interestingly, he left school with a doctorate in industrial radiology. The doctor-turned-entertainer followed his limelight dreams. He traveled the world, gaining recognition in films, television and radio. He still collects royalties from a 1974 hit, “Sugar Baby Love,” he said. The song is consistent with the British 1970’s sound, carrying memories of peace, harmony and bell-bottom jeans. His band first wrote and recorded the song for fun. Eventually, the Rubettes were created as a front band to send the song to the masses, he said. It ascended to the top of British music charts and remained there for several weeks.

“When I sang,” said Lyons, “I had to play the piano as well. I actually had to play it with a microphone dropped nearby. There were no computers or separated recording sessions. Back then, you really had to have the talent and be able to perform. Everyone struggled to become big stars.” Lyons has a contagious respect for those who’ve recorded using limited resources.

“There were no computers or separated recording sessions. Back then, you really had to have the talent and be able to perform. Everyone struggled to become big stars.”

“We once went to a big show in California as a warm-up band,” he said. In 1975, he traveled to the United States to help open a concert full of celebrity artists in Los Angeles. Billy Joel had been establishing his career as a musical icon and Neil Diamond performed as the night’s most anticipated entertainer. “I met John Denver there too. He was quite strange, even then. He was very into the environment. I had never been to Colorado. I didn’t know what he was talking about.”

“During college in England, I worked part time for BBC,” said Lyons. The British Broadcasting Corporation was founded in 1922 to inform, educate and entertain. Today, the corporation produces programs and broadcasts on television, radio and the Internet. BBC asked Lyons to go to the Gulf state of Oman in 1972. In 1977, his wife Caroline passed away from Leukemia. A newly instituted radio station in nearby Qatar had offered him a change in scenery. Lyons accepted the radio position, since it allowed the widower to care for their son without frequent travels.

“I don’t know how I would have made it in the film business,” said Lyons. “It was either my son or films. Of course, my son was most important. When you have children, your first duty is to them, not your career. Children do not ask to be born but once they are, it takes years to bring them up. Qatar made me an offer I couldn’t refuse.”

“When I first came here in 1977, all I saw was sand,” he said. “Where there was no sand, there was the sea. There were small shops everywhere – no Sheraton, no Corniche, no malls. The gold shops have always been here, gold has always been important to Arabic traditions. The innate honesty at the time was the most incredible. If you didn’t have money, shop owners would let you leave with items and come back later with money. I had borrowed items from gold shops worth thousands of dollars to show my wife – they just expected you to return with it, or the money, and you always did.”

Lyons insists Qatar has always contained trustworthy communities. He feels safe on the Gulf peninsula, safe from vandalism and thieves.

“Here I don’t have to worry,” said Lyons. “Back in England, our house has four locks on the door! Rosemary has had her car stolen twice in London – and mugged.” Lyons met Rosemary in Bath, England. By chance, he had previously met her late husband in Qatar. The two began a relationship and later married. Today, Lyons has homes in Ireland, England and India, as well as a villa in Doha.

“I am not Muslim,” he said. “I come from Ireland, a very Catholic area where everyone knows everyone. But you don’t spend 30 years in an Islamic state without learning something, and I don’t see anything wrong with Islamic laws. Expatriates have never had a problem here – unless they do something bad. You can’t drink and drive in America, you can’t do it here either. You can’t go to the beach wearing a g-string bikini, but some people shouldn’t be wearing them anyway! I have been in every Gulf country and some have gone too far – they open up too much, too quickly. I like Qatar the best.”

“I am not Muslim. I come from Ireland, a very Catholic area where everyone knows everyone. But you don’t spend 30 years in an Islamic state without learning something, and I don’t see anything wrong with Islamic laws.”

Lyons has adjusted to the Islamic state, as an entertainer, entrepreneur and family man. His morning broadcast on QBS allows him to be creative and frequently spontaneous. He often finds himself writing his content during a show. Lyons fully accepts his responsibility to keep apolitical without insulting anyone.

“We are all inter-connected,” he said. “I can say something in Qatar that can affect someone elsewhere. I have to be careful what I say – even when reading the news or if I do not agree with something.” The broadcaster’s experience calls for true creativity. A program cannot be based on controversial or crude commentaries, or perverted humor.

“Anyone can tell dirty jokes,” said Lyons, “but that doesn’t mean you’re talented. Many disc jockeys are not only rude but totally offensive. Kids cannot listen to it – nobody wants them bringing it into their home. I don’t believe you need to use that kind of content if you’re talented.” A true indication of on-air talent is the ability to rise above your limitations while embracing the positive nature they may convey, he said.

“I love the new stuff but I will only air what isn’t offensive. Many records we get from the States, we can’t use. I get requests for Eminem, but after editing the content – there is nothing left to play.

“Qatar only has one radio station and we need to please everyone,” said Lyons. Qatar receives reception from neighboring countries, but QBS is its sole radio show provider. “I enjoy Qatar because I get calls from everywhere – Indian, American, Filipino – they all want different things. It keeps it interesting.”

Lyons takes his request very seriously. In 1993, his knowledge of music history was put to the test when someone asked about the first song ever released on a 45-inch record. “I called everywhere. I found the name of the song from a guy at RCA records in New York. It was ‘Ghost Riders in the Sky,’ by Vaughn Monroe.” Lyons is quick to place a copy of the 45 in his vintage record player placed conveniently in his living room. In fact, he is quick to expand anyone’s knowledge of musical history with fascinating and commonly unknown facts.

Another prized album is a current world record holder for the most expensive single ever made: Tina Turner’s performance of “River Deep, Mountain High” in 1963. The song is more commonly known by Celine Dion’s early-1990’s version. When he plays it on the radio, people call in and ask if it’s a new version.

“Tina Turner gave me the shimmy leather shirt she wore in a show for the American Navy in 1991,” said Lyons with his proud piece of history. “People have asked me to sell it but I would never part with it.” Now known as the Marriot, the Gulf Sheraton was a recurring entertainment venue for U.S. war fighters during the first Gulf war – and Lyons was frequently involved. Turner’s 1991 show eventually lead Lyons to start a stage-lighting business.

“They phoned me and said they needed lights. I called a friend in Italy and had them shipped to Qatar. We lit up Tina Turner but I knew we would need the lights again – many artists were coming to Qatar, specifically for the Americans. So we started getting a lot of special effects lights as well. The business snowballed but it really was started by accident.”

“You just collect these things through life,” he said, referring to his Qatar home, which is littered with remnants of an entertainer’s eventful life. Numerous objects represented countless memories. His grandson’s puppy coexists with a small pet turtle – both enjoying their freedom and attention as they trot across the floor.

“You never know what you’ll see here but without my grandson Alexander, this house is like a museum. That’s one thing about being a disc jockey: you never forget what it’s like to be young.” His young grandson’s cheerfulness and appreciation emits an obvious presence in the home.

“I love what I do,” said Lyons. “I have to be one of the happiest persons in the world. At my age now, my first priority is my grandson. If my family is happy, I’m happy.”