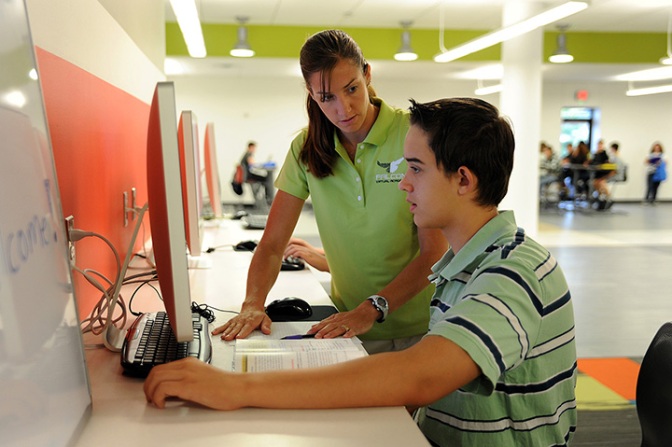 The virtual academy, authorized by Falcon School District 49 in 2010, is now leveraging instructional technologies in a renovated 21,000 square-foot facility, which triples its previous size, increases its Internet bandwidth and expands its students’ options.

Within the colorfully decorated and sprawling learning space, students are interacting with teachers, who are balancing Apple MacBook Pros, iPads and iPhones. Students are attending Web-based classes with school iMacs and Windows desktops, or their personal laptop attached to the school’s Wifi.

During the facility’s first day open, students arrived for one-on-one and small group tutoring, lessons and labs. Parents quickly began using the building, too – like Maria Enright, who has five children enrolled in the academy, from third to ninth grade.

An art studio and science lab are scheduled to open in October, during fall break.

“When we had that first year, really it was a very small room … and that’s where everyone came to meet,” said Knoche, while explaining District 49’s virtual academy to visitors from Educational Service District 123, based in Pasco, Wash.

ESD 123 faculty and board members had arrived for the facility’s opening day. Knoche and Kim McClelland, iConnect Zone innovation leader, presented their implementation of online and blended learning at conferences earlier this year. They caught the attention of school districts around the country.

“It was really just face-to-face support and that’s all there was,” said Knoche, describing the academy’s inaugural year, when McClelland was principal. “We didn’t teach any blended classes, everything was done online.”

Falcon Virtual Academy enrolled its first student in July 2010. Five high school seniors graduated in 2011, and then 35 in 2012. Now with more than 400 students, more room and improved infrastructure, its educators will offer additional blended coursework.

“I have learned a lot of lessons about the online world, and Kim is fantastic at it – she’s an absolute expert,” said Knoche. “As we progressed into year two, we started having a lot of conversations with parents about ‘what do you want?’”

“When we started looking at the data,” said Knoche, “the kids who came into blended, and significantly in the building more than others, started having much better results.

“There’s not a lot of blended models,” he said, “not from the perspective we’re doing it – from virtual adding brick-and-mortar classes. You can see a lot more models of brick-and-mortar adding virtual components.”

Falcon Virtual Academy staff collaborated with its district’s administration, facilities and information technology personnel, as well as architects and various career educators. Board of Education directors remained an integral part of planning and approval processes. 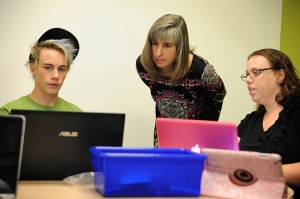 “We really started to figure out what our emphasis was going to be,” said Knoche, while suggesting a mounting need to use electronic portfolios for online student evaluations. “We want to start moving away from multiple choice tests and those types of things.

“Our teachers have some pretty lofty goals about what they’d like to do in this project-based world,” he said.

More than 16,000 primary and secondary school students are enrolled in one of the more than 30 online schools in Colorado, up more than 15 percent since the 2009-2010 school year, according to the Colorado Department of Education.

McClelland says District 49 is providing a model for other virtual academies.

“These are some exciting initiatives we are fostering for student learning,” said McClelland. “We hope that schools in our own district, as well as those around the country, can collaborate with us to do what’s best for students.”