As patrons entered Falcon Elementary School for an evening orientation, less then two weeks into the 2012-2013 school year, they received a personal invitation to tour the school’s pioneering healthcare facility with a community partner.

Peak Vista Community Health Centers of Colorado Springs earned a competitive federal grant last year to partner with three local schools, allowing it to help students get treated for acute illnesses, such as flu, and chronic conditions, including asthma, allergies and diabetes.

The nonprofit health organization, specializing in primary medical and dental services, used the grant to improve two existing school-based health centers and open a new one, according to the Colorado Association for School-Based Health Care.

El Paso County’s Harrison School District 2 obtained new equipment in its center, which opened in 2008. Teller County’s Cripple Creek-Victor School District RE1 opened a facility in 2009, and ongoing construction alterations are meant to enhance its capabilities.

District 49’s construction project introduces a new school-based health center. It’s open Tuesdays and Fridays, 8 a.m. to 5:30 p.m., for district students and their siblings, 21 years old and younger. Since the first patient Aug. 7, more than 40 students have benefited – most needing physicals and immunizations.

Schools have direct contact with more than 95 percent of Americans between 5-17 years old, according to the Centers for Disease Control and Prevention. The government’s public health advocate lists health services as a key component of coordinated school health programs. 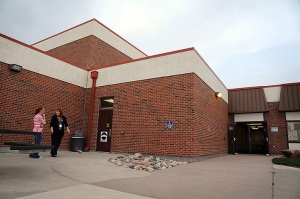 An enrollment outreach specialist attempts to bill a patient’s insurance company, or qualify them for Medicaid or Child Health Plan Plus. They also seek discounts through the Colorado Indigent Care Program. Grants help offset out-of-pocket costs, including copays.

“We are pretty excited to be in a community that’s innovative and vibrant,” said Pam McManus, Peak Vista Community Health Centers president and CEO, while speaking to parents during the elementary school’s open house event.

“School-based health centers are coming of age and what they’re showing is that it reduces absenteeism, reduces tardiness… it increases the grade point average.”

Early research found the centers improved student access to health services, while encouraging appropriate use of public resources. According to a study published by the Journal of Adolescent Health in October 1996, the centers increase the use of primary care, while decreasing hospitalizations and the overuse of emergency rooms.

After taking a call about a life-threatening injury, paramedics from Station 3, staffed 24/7, usually respond to Falcon Elementary School in less than two minutes, according to Falcon Fire Protection District. An ambulance from Station 1 can be expected within eight minutes.

“It’s been an honor and a privilege to be a part of this from the very beginning,” said Tammy Harold, District 49 Board of Education president, elected in 2009 for a four-year term.

“At Falcon School District 49, we constantly are trying to find innovative ways to support our community,” said Harold, “and this is the perfect opportunity for us to support our families.

“I am so pleased that Peak Vista was able to partner with us on this,” she said. “It’s just an amazing organization and it’s wonderful to have them here, in our community, providing our students a healthy environment for them to learn in.” 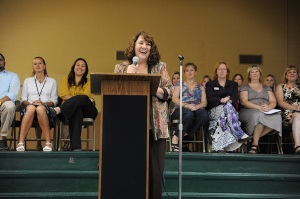 The partnership between Peak Vista Community Health Centers and District 49 will support more than 15,000 students, many located in the rural areas of northeast Colorado Springs and Peyton, by improving their access to basic primary healthcare.

In November 2009, there were nearly 2,000 school-based health centers nationwide, according to the most recent census by the National Assembly on School-Based Health Care. President Barack Obama signed the Affordable Care Act into law March 23, 2010, freeing up funding for federal grants to build on the services.

The act appropriated $50 million a year from 2010 to 2013 for a grant program to supply financial support in the improvement and expansion of services at school‐based health centers, including new constructions, alterations, renovations and equipment-only projects.

In July 2011, the Health Resources and Services Administration, through the competitive funding opportunity, awarded $95 million to 278 school-based health center programs across the country. Colorado was awarded almost $2.5 million.

The center’s entrance is adjacent to the school’s front doors, roughly 50 feet away. Its waiting area and front desk lead into a hallway flanked by a laboratory and two exam rooms. A rear storage area is stocked to anticipate student needs.

Additionally, there are offices for a healthcare provider, medical assistant office, as well as a room for behavioral health counseling and private meetings.

“I don’t normally get letters from senators – we have one,” she said.

“I applaud you for your commitment to providing greater opportunities for the students to receive integrated primary medical care and behavioral health care,” said McManus, reading Bennet’s letter.

“Your efforts serve as an example for the rest of the state and the region.”