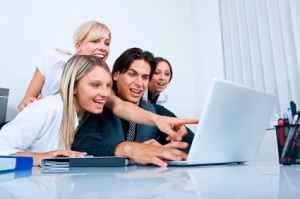 While they’re hiking around Mt. McKinley, the highest peak in North America, or fishing in the colorful Yukon River watersheds, or sailing along the more than 33,000 miles of mainland and island shorelines, Alaskans aren’t too removed within their vast wilderness. They’re also widely enjoying the latest in social networking technologies. Alaska contains the most Facebook users per capita, based on data from the U.S. Census Bureau (2011) and Facebook (2012). With all age groups considered, nearly three out of five residents (58 percent) of the northern state access Facebook. The following review of statistics demonstrates that social media is a powerful marketing tool for reaching people dispersed over remote areas.

According to a comparison of data, 49 percent of the populations in the 50 U.S. states use Facebook. New Mexico is the least penetrated; roughly two out of five residents (41 percent) use the social networking website. When comparing U.S. cities with more than 1 million people, the Riverside-San Bernardino-Ontario metropolitan area, 4.2 million Californians, reveals the lowest urban Facebook use — just one out of 10 residents. On the other hand, the Austin-Round Rock-San Marcos metropolitan area in Texas tops the big city list. Nearly half of the 1.7 million Texans there (49 percent) use Facebook. The southern state’s urban area matches the national average. Moreover, the per capita average for the 50 most populated metropolitan areas is just 31 percent, far below the national average. This data suggests a significant portion of the people using social media reside in America’s less populated locations.

According to a Pew survey in May 2011, 78 percent of adult men and women in the United States use the Internet (2011). Of the people in urban areas, 79 percent are connected. Outside the cities, 80 and 72 percent use the Internet in suburban and rural populations, respectively. Based on the U.S. Census and Facebook data, the states with the greatest per capita use of Facebook — more than 54 percent — enclose large rural and suburban areas: Alaska, New York, Washington, Nevada, California and Hawaii. Meanwhile, only 17 percent of the almost 19 million people living in the largest U.S. metropolis, the New York City-Long Island area of New York, use Facebook.

A mounting adoption of mobile systems may be contributing to an expanding use of social media away from urban settings. Facebook reported 845 million monthly active users worldwide at the end of December 2011, of which more than 425 million were accessing it from a mobile device (2012). According to Pew, the use of desktop computers is falling, while laptop, tablet and cell phone use is rising (2011).

State and metropolitan populations based on data provided by the U.S. Census Bureau, 2010 Census statistics. Facebook user data provided by Facebook for advertisers, Feb. 7, 2012. The social networking website estimates location-based audiences using IP (Internet Protocol) addresses, which help identify each website user’s physical state or city. Users who list an address on their profile may see ads targeted to that location, regardless of where they are currently located.