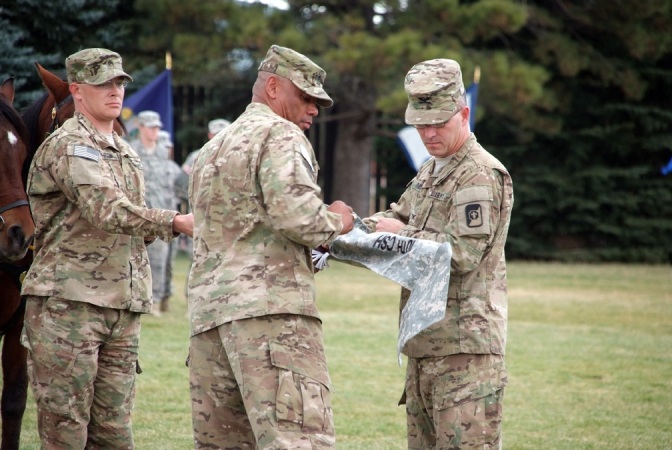 “We will provide the trauma management and hospitalization to the soldiers, sailors, airmen, Marines, coalition members, civilians and, yes, enemy wounded, across nearly one third of Afghanistan,” said Col. Michael Place, 10th CSH commander, after concealing his unit’s colors on Manhart Field.

Place will uncase the 10th CSH colors in Afghanistan, representing the unit’s readiness for its fourth combat deployment since 2001, he said. Two companies stood behind him, flanking a mounted color guard.

Company A was dressed in the Operation Enduring Freedom camouflage pattern, created for the multiple operating environments of Afghanistan. About 230 soldiers from the company would soon join the 121 “Mountain Medics” who’ve already deployed, he said, forming a combined force from 30 military installations.

“These soldiers here will save lives,” said Place. “Our goal is that 98 out of every 100 patients admitted to our facilities survive, despite the most horrific injuries, matching the highest rates in the history of warfare.”

“Somewhere a soldier is bleeding,” said Place. “We will do all in our power, each and every day, to prevent that bleeding soldier’s loved ones from having to attend a memorial service. The soldiers in front of you are truly angels on the battlefield.”

“We will do all in our power, each and every day, to prevent that bleeding soldier’s loved ones from having to attend a memorial service. The soldiers in front of you are truly angels on the battlefield.”

A drawdown of forces shaved the unit’s initial manpower requisite, said Capt. Adam Charles, Company A commander. President Barack Obama said the progress made in Afghanistan has allowed 10,000 U.S. troops to return home by the end of December, according to the American Forces Press Service, June 22.

“There are a lot of positive attitudes out here today — there are a lot of smiles,” said 1st Sgt. Jennifer Francis, Company A, who said cutting dozens of soldiers has permitted mostly a volunteer deployment.

“A lot of them were saying ‘I want to deploy and provide care overseas,’” said Francis, explaining that unit cohesion had been solidified during intense training the past three weeks, including vehicle roll-over exercises, basic war fighting scenarios and service weapon qualifications.