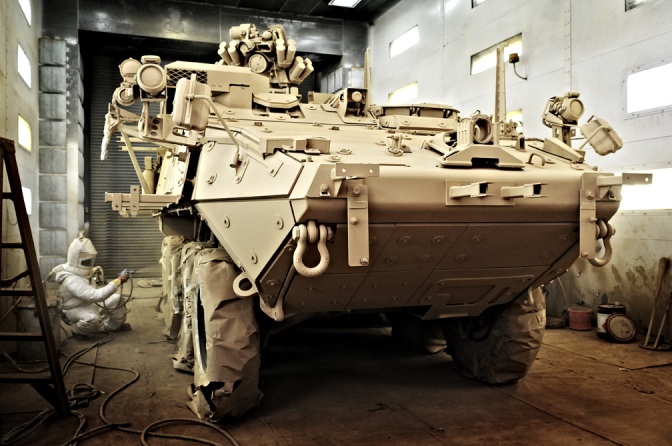 Jagadish Hajam, an auto body repairman and painter from Nepal, applies a coat of Tan 686A on the wheels of a Stryker armored combat vehicle Oct. 3, 2009, inside a booth at Camp As Sayliyah, Qatar. The infantry carrier vehicle was the first vehicle to adopt the new desert tan color in Southwest Asia, in preparation for a planned phase out of the Stryker’s current deep green color.

The vehicle that had been restored after deterioration during enemy engagement in Iraq. Produced by General Dynamics Land Systems, the eight-wheeled armored combat vehicles have been painted a foliage green color since their combat debut in 2003, supporting Operation Iraqi Freedom. Talks about changing the color had been ongoing since 2004. Tan 686A is a paint meant for desert camouflage. It’s the same solid color covering most military equipment throughout Southwest Asia, where encountering dust storms and sand dunes are common. On Strykers, dust collects on the the hull’s abrasive texture and helps lighten its color. The Army later rescinded on the idea of transitioning the vehicle to desert tan.