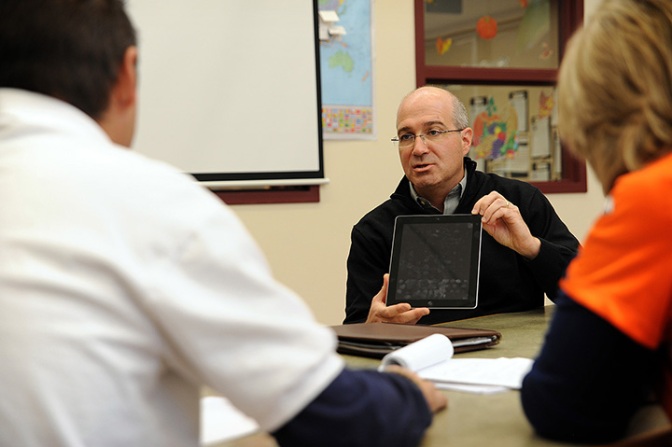 PEYTON, Colo. – While standing in a library Oct. 31 in Falcon School District 49, Patrick Davis held up an Apple iPad, affirming its significance in education.

Surrounded by teachers and parents at Odyssey Elementary School in Colorado Springs, Davis said the tablet computer would accelerate education innovation for the Pikes Peak region. He’ll sign a check for $17,000 this week to put iPads in the school’s first grade classrooms.

The nonprofit organization is raising $15 million to afford a one-to-four iPad distribution plan for first-fifth graders in El Paso County by 2017. The initiative stands to benefit more than 50,000 students. Davis says the ultimate goal is a one-to-one roll out.

Through partnerships with community leaders, businesses and parents, Davis is forecasting a pace of one grade level per year. He says it’s a terrific way for local businesses and philanthropists to invest in their community’s future.

“If we put iPads in the hands of first graders, in all of El Paso County, we’re going to raise the level of education across the board,” said Davis. “We’ll give not only our education community something to crow about, but also our business community.

“They’ll have something to say to the rest of the world – come and grow your business here, bring your employees here, because you get world class, high tech-based education, from first grade all the way to twelfth grade.”

iPads provide a platform for touchscreen textbooks, interactive projects and portable catalogs of images and videos. With more than 700,000 apps, including tens of thousands of items classified as educational software, Davis says all schools need the devices.

They engage young minds with action-based learning, using an immediate feedback process that promotes life-long learners through a positive process, he said. Teachers can focus more on proper instruction, coaching and mentoring, less on administration.

Odyssey Elementary School is the first in District 49 to receive iPads from the Neumann Education Foundation. Within weeks, the school’s four first grade classrooms will receive 27 iPads and cases, as well as a storage cart.

“They approached us about six weeks ago with the wonderful news,” said principal Pam Weyer. “It’s important to start with first grade, start building the skills early.”

Odyssey Elementary School is helping to lead the foundation’s initiative, as the fourth school to receive its iPads, said Davis, who’s confident all first grade classrooms in the county will be equipped in 2013.

“You picked a good school because we just finished a bunch of training with Apple iPads and Powerbooks,” said Bryn Abrahamsson, a first grade teacher. She had been using an iPad in her classroom, as part of a district pilot program.

During summer break, District 49’s Board of Education approved a three-year lease for 250 iPads in the POWER Zone, where educators are studying the feasibility and value in a one-to-one district distribution plan. As part of the transition from Microsoft to Apple operation systems, teachers received new Apple MacBook Pro laptops, too.

‘Ready to rock and roll’

“I feel like I’m ready to rock and roll with my iPads,” said Abrahamsson, suggesting the tablets offer stable, intuitive systems for teaching reading, writing and math skills, as well as deductive reasoning for improved problem-solving skills.

“Now it’s just a matter of finding the right apps,” she said. After more than a decade as an educator, Abrahamsson is now an app hunter, searching for software that’ll best fit specific learning needs and classroom situations.

“I already know that any student in my classroom will work with flash cards, as long as they can do it on the iPad,” she said, describing how children quickly and quietly cooperate when they’re provided lessons using the tablets.

“For many of the kids, they don’t even know they’re learning,” said Weyer. “It’s the motivation and that’s so important. … The kids are 100 percent engaged because of the presentation.”

Davis says the Neumann Education Foundation is providing an opportunity designed to make a significant, multiplying and lasting investment in Colorado’s next generation.